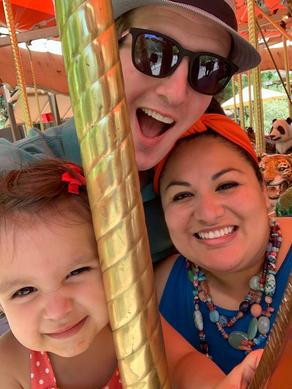 ​I was born in Manhattan and raised in the NYC suburbs. I was your typical “theater kid,” having gotten bitten by the bug very early. I grew up going to Broadway shows, did all the school plays, and pretty much always knew that I wanted to be an actor.

After graduating from high school, I went for a change of scene and attended Indiana University-Bloomington. I double majored in Theatre and English, and after receiving my bachelor's degree there I moved to Chicago, where I earned an M.F.A. in Acting from The Theatre School at DePaul University. I lived in Chicago for about eight years, and appeared in many productions with such companies as Light Opera Works, Theo Ubique, Theatre at the Center, Festival Theatre, Bailiwick Repertory, Redtwist, City Lit, and Circle Theatre, in addition to seasons of summer stock at Timber Lake Playhouse, Wagon Wheel Theatre, and Festival 56.

Like many actors, after I turned 30, I decided I had to find a way to continue my theatre career while also being able to have other nice things like a family, a house, a car, and a diet that consists of more than just breakfast cereal. My future wife Heidi and I also wanted to be closer to my parents, who had moved from New York to Arizona. One thing led to another, and I got a job as the drama teacher at Tempe Preparatory Academy right outside of Phoenix, where I am currently in my seventh year. We have young daughter named Marisol, who is pretty much the sweetest, cutest kid on the planet, and the greatest thing to ever happen to us. We also have a goldendoodle named Algernon, who is totally bonkers.

Since moving from a place where the cold can easily kill you to a place where the heat can easily kill you, I have come to truly love teaching theatre and directing plays. I also continue to act professionally and have appeared in the area at Phoenix Theatre as well as Southwest Shakespeare Company, where I also run their summer conservatory program.

I am grateful for a wonderful life and to be able to make a living in the theatre.